When the British assembled their empire, they took their games and sports and moustaches with them, even to the hottest places. Some people were bemused, as in this anecdote, relayed by Jan Morris in her book Hong Kong, when discussing the early days of the colony.

An old tale tells of the Chinese gentleman who, watching a pair of Englishmen sweating away at a game of tennis, inquired why they did not hire coolies to play it for them.

We do not know whether they took heed of this pearl of Eastern wisdom, but it would certainly have been more reasonable to sit calmly in the shade or else, if they were really incapable of sitting still, to equip themselves with something like the following admirable device: 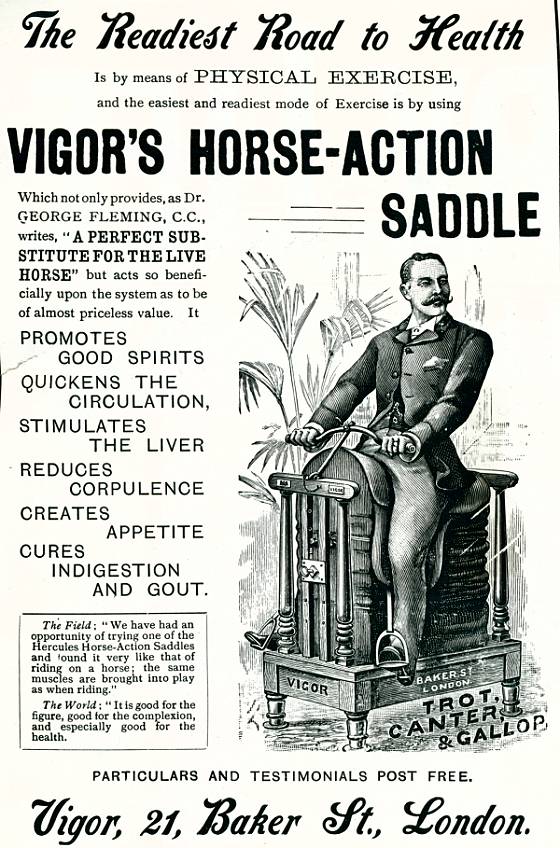 Perhaps this is Dr. Watson trying out the contraption. After all, he was just down the road at 221B Baker St.

The Horse-Action Saddle was also available for ladies:

It is interesting to note that the saddle does not seem to have the same effect on gentlemen and ladies. Only in the case of ladies is it noted that the saddle provides a “complete cure for … HYSTERIA…”.

Also interesting, at the top of the ad, is the plug from the Countess of Aberdeen (who was never taught the difference between direct and reported speech):

Her Excellency the Countess of Aberdeen writes: “That the saddle has given her complete satisfaction.”