Flann O’Brien was a pen name of Brian O’Nolan, an Irish author who is most famous for three novels, At Swim Two Birds, The Third Policeman and the Dalkey Archive.

He also wrote a column for the Irish Times from 1940 to 1966 full of wild imaginings.

I once read an anthology of his Irish Times pieces and one thing I have never forgotten is his proposal for a service which he called “Book Handling”. Even in this electronic age it could still be useful. Here are some extracts to show his thinking:

A visit that I paid to the house of a newly-married friend the other day set me thinking. My friend is a man of great wealth and vulgarity. When he had set about buying bedsteads, tables, chairs and what-not, it occurred to him to buy also a library. Whether he can read or not, I do not know, but some savage faculty for observation told him that most respectable and estimable people usually had a lot of books in their houses. So he bought several book-cases and paid some rascally middleman to stuff them with all manner of new books, some of them very costly volumes on the subject of French landscape painting. I noticed on my visit that not one of them had ever been opened or touched, and remarked the fact. ’When I get settled down properly,’ said the fool, ‘I’ll have to catch up on my reading.’ This is what set me thinking. Why should a wealthy person like this be put to the trouble of pretending to read at all? Why not a professional book-handler to go in and suitably maul his library for so-much per shelf? Such a person, if properly qualified, could make a fortune.

END_OF_DOCUMENT_TOKEN_TO_BE_REPLACED

In his book on Australia, Down Under, (entitled In a Sunburned Country in the USA and Canada), there is a moment when Bill Bryson is trying to find something to listen to on the radio while driving towards, if I recall properly, Adelaide. Nothing seems to be on the air. But, eventually, he comes across coverage of a cricket match. This gives him an opportunity to unleash a hilarious parody of cricket terminology and commentary styles. If you don’t know anything about cricket and can’t tell a square leg from a silly point or a third slip, have a look at the map of real fielding positions above, which may help you to understand what he is making fun of.

Eventually the radio dial presented only an uninterrupted cat’s hiss of static but for one clear spot near the end of the dial. At first I thought that’s all it was — just an empty clear spot — but then I realized I could hear the faint shiftings and stirrings of seated people, and after quite a pause, a voice, calm and reflective, said:

“Pilchard begins his long run in from short stump. He bowls and . . . oh, he’s out! Yes, he’s got him. Longwilley is caught legbefore in middle slops by Grattan. Well, now what do you make of that, Neville?”

“That’s definitely one for the books, Bruce. I don’t think I’ve seen offside medium-slow fast-pace bowling to match it since Badel-Powell took Rangachangabanga for a maiden ovary at Bangalore in 1948.”

I had stumbled into the surreal and rewarding world of cricket on the radio.

END_OF_DOCUMENT_TOKEN_TO_BE_REPLACED 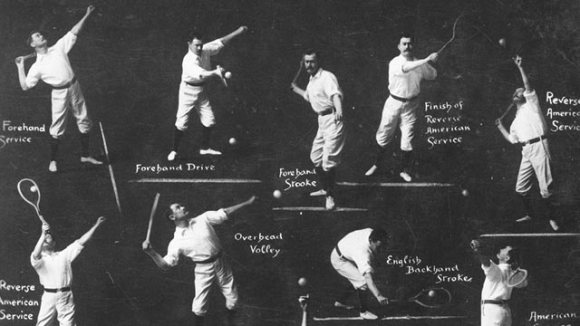 When the British assembled their empire, they took their games and sports and moustaches with them, even to the hottest places. Some people were bemused, as in this anecdote, relayed by Jan Morris in her book Hong Kong, when discussing the early days of the colony.

An old tale tells of the Chinese gentleman who, watching a pair of Englishmen sweating away at a game of tennis, inquired why they did not hire coolies to play it for them.

We do not know whether they took heed of this pearl of Eastern wisdom, but it would certainly have been more reasonable to sit calmly in the shade or else, if they were really incapable of sitting still, to equip themselves with something like the following admirable device:

Perhaps this is Dr. Watson trying out the contraption. After all, he was just down the road at 221B Baker St.

The Horse-Action Saddle was also available for ladies:

It is interesting to note that the saddle does not seem to have the same effect on gentlemen and ladies. Only in the case of ladies is it noted that the saddle provides a “complete cure for … HYSTERIA…”.

Also interesting, at the top of the ad, is the plug from the Countess of Aberdeen (who was never taught the difference between direct and reported speech):

Her Excellency the Countess of Aberdeen writes: “That the saddle has given her complete satisfaction.”

When I look at of the books in my library, the only thing I can remember in most cases is whether I have read them or not. Books in the second-largest category trigger one single anecdote or image and nothing else. One image which has been in my head for decades now comes from a book by Alberto Savinio (the brother of the painter Giorgio De Chirico), who was a fine writer and music critic, but of whom the only thing I recall is this passage he wrote about Gioacchino Rossini:

When, in Rossini’s symphonies, the allegro theme with the repeated little notes starts up, followed by one of his famous crescendos, I close my eyes and I see an ancient train with the steam engine in front, an ostrich-neck smoke stack with something like a pasta colander on top and the open-sided carriages behind, the curtains flapping and all full of fat Rossinis, paunchy and chuckling, who blow kisses to the crowd and shout out witticisms. The train starts giving off slow puffs, which then pick up pace, until they reach a steady, blistering speed, and the train races through the countryside, which is green with astonishment.

I often think about that when I hear Rossini’s music.  Here are some of his famous crescendos. Try and see the train going by. Or get on and stand behind all the Rossinis as you go through the greenly astonished countryside.

Rossini retired from writing operas when he was 37. He wrote some other music, including some pieces which he called “Old Age Sins”, one of which is about peas (Ouf, les petis pois!).

He was famous for his witticisms. Just like the images from my books, I recall one in number. It’s about Wagner (look away now, Wagner fans):

“Mr. Wagner has some wonderful moments, but some awful quarters of an hour.”

(Note: the caricature of Rossini is by David Levine. You can see several other outstanding examples of his art here.) 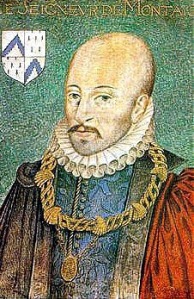 I can’t think of anyone who could have written such a classically phrased sentence about such an unclassical topic. Actually, Montaigne goes on to say (in his essay on the Imagination) that in fact this criticism is unfair since all the parts of our body act without our consent. Do we command our hair to stand on end? Or our hearts to beat faster? And he goes on to mention a number of different organs. I can’t help thinking, though, that the one of the main reasons for his adding this was to be able to report the exceptional case of someone who could fart in tune.

Similarly, I find it hard not to mention an anecdote I was once told about “le membre”. At an international committee meeting, a British delegate decided to introduce the new Belgian delegate to the French chairman.

“Introduire” in French is a bit different from “introduce” in English, so I suppose you could render it as follows:

British delegate: May I have the pleasure of introducing the Belgian member into you?

After a moment, I heard Baron Pips laugh quietly and asked why. He said : ” You sound just like Count Sternberg.” He was ancient and rather simple-minded Austrian nobleman, he explained. When he was on his death-bed his confessor said the time had come to make a general confession. The Count, after racking his brains for a while, said he couldn’t remember anything to confess. “Come, come, Count!” the priest said, “you must have committed some sins in your life. Do think again.” After a long and bewildered silence, the Count said, rather reluctantly, “Habe Hasen geschossen”—”I’ve shot hares”—and expired.

from A Time of Gifts – Patrick Leigh-Fermor

I remember a Russian once telling me that when he read Nabokov in Russian it felt like he was eating words. I have since found that imagining that you are doing just that is one of the best ways to read (and imagining that you are dealing with single words may be one of the best ways to eat). Nothing is tastier or takes its place more interestingly in the mouth than the opening paragraph of Lolita :

Lolita, light of my life, fire of my loins. My sin, my soul. Lo-lee-ta: the tip of the tongue taking a trip of three steps down the palette to tap, at three, on the teeth. Lo. Lee. Ta.

(This is a passage from Bill Bryson’s “Notes from a Big Country” which makes me laugh every time I think about it. It is the start of a chapter entitled “Drowning in Red Tape”.)

I’m not even going to begin to tell you about the frustration of trying to get a foreign-born spouse or other loved one registered as a legal resident in the United States because I haven’t space and anyway it is much too boring. Also, I can’t talk about it without weeping copiously. Also, you would think I was making most of it up.

You would scoff, I am quite sure, if I told you that an acquaintance of ours – an academic of high standing – sat open-mouthed while his daughter was asked such questions as ‘Have you ever engaged in any unlawful commercial vice, including, but not limited to, illegal gambling?’ and ‘Have you ever been a member of, or in any way affiliated with, the Communist Party or any other totalitarian party?’ and – my particular favourite – ‘Do you plan to practise polygamy in the US?’ His daughter, I should point out, was five years old.

(Sei Shonagon was born in Japan around the year 965 CE and served as a lady in waiting to Empress Sadako. In her Pillow Book, she gives an account of the things she saw and her feelings. Every now and then she provides a list of things, which are like tiny exhibitions organised by an unpredictable curator).

Things That Should Be Large

Priests. Fruit. Houses. Provision bags. Inksticks for inkstones.
Men’s eyes: when they are too narrow, they look feminine. On the other hand, if they were as large as metal bowls, I should find them rather frightening.
Round braziers. Winter cherries. Pine trees. The petals of yellow roses.
Horses as well as oxen should be large

Things That Should Be Short

A piece of thread when one wants to sew something in a hurry.
A lamp stand.
The hair of a woman of the lower classes should be neat and short.
The speech of a young girl.