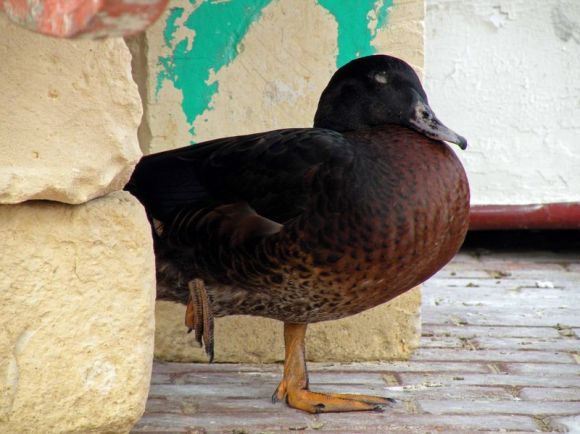 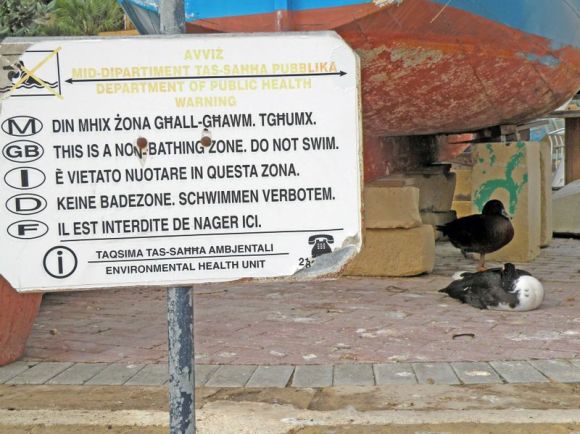 … and the dog on duck patrol ?

If you want to know why the duck is in a yoga position, here is a very pretty Vietnamese legend which explains it. (Taken from “Vietnam Culture” )

Many people must have wondered why ducks are accustomed to sleep in the funny way that they do – with one leg lifted. The Vietnamese have an interesting explanation for this.

After Heaven had completed the creation of the world, there were four ducks who found that they only had one leg each. it was difficult for them to walk, and sometimes they were unable to find enough food. They became very morose when they saw how easily other fowls and animals moved about on two legs.

One day the four unfortunate ducks held a meeting and discussed their ignoble condition. They had arrived at a point where life on one leg could no longer be endured, so they decided to lodge a complaint to Heaven. But they were entirely ignorant of Heaven’s location, and they did not even know how to draft a petition.

One of them suggested that they should turn to the rooster for help. The others protested that his penmanship was so bad that no one in Heaven would be able to read the petition. But there was no one else to whom they could turn, so after having quacked and grumbled for some time, the four of them went to find the rooster, who was only too eager to help and readily scratched out the desired petition.

The ducks read the petition and then held another meeting to decide which one of them should carry it. The way to Heaven was long and tedious and beset with many pitfalls, so that none of the one-legged ducks was enthusiastic about undertaking the journey.

The rooster, who was standing some distance away, overheard the lively discussion. He coughed discreetly, and approaching the group, delicately asked whether he might be of further service. They were very pleased and accepted his offer to help.

“Not far from here there is a temple,” he suggested, looking wisely down his beak “and it happens that I am acquainted with the god of the place. He could convey your petition to Heaven, and I can give you a letter of introduction to him.”

The ducks were loudly grateful whereupon the rooster put on his spectacles and wrote out a suitably worded letter for them.

The ducks then proceeded to the temple, and as they entered its precincts, they suddenly heard a loud, imperious voice wanting to know why the temple’s incense burner had eight legs instead of four. The voice continued by demanding that the four extra legs be removed immediately.

As the ducks heard this, their hope rose. They did not know what an incense burner was, but they understood that four of its legs were to be removed immediately. They hurried into the temple. The god was still frowning at the incense burner when they entered, and he looked at them unsmilingly.

“Your lordship,” said one duck, who had become the spokesman for the group, “here is a letter for you from our friend and neighbor, the rooster and also our petition. It’s about our need of four legs; as you see we have only one leg each.”

The god replied that what had been given them at creation was final, and that their petition would serve no purpose. At these words the four duck fell silent. But then one, younger than the others and more desperate, spoke up and said what was on the minds of all four.

“Your lordship,” he stammered, “you spoke just now of removing four legs from the incenseburner….”

The god looked at him wide-eyed for an instant and then burst into uncontrollable laughter. In the end he agreed to give the ducks the four extra legs.

“But mind you,” he said, handing them over to the ducks and winking at the incense burner, “these legs are made of pure gold and are very precious; guard them carefully.”

The ducks were ready to promise anything. They took their legs with indescribable joy. They bowed and thanked the god. They attached the extra legs to their bodies and soon they were able to move about like their fellow creatures. But at night when they went to sleep, they would pull up the leg given them by the temple god so that no one could steal it. Other ducks, seeing this, assumed it was the proper way to sleep and in imitation began to lift one leg before retiring for the night. And so the custom has remained to this day.