When I was a small boy I had a book about science which ended with a few pages of illustrations of how life would be in the 21st Century.

I am pretty sure that it told me that we would farm the sea. (I think there was some kind of marine combine harvester in action). Nuclear power would be a perfect solution to our energy needs, so safe that we all might have miniature power plants underneath our kitchen sinks.

As in all such predictions there would be flying cars which would transport individuals down the city’s canyons and land them safely on the roofs.

There wasn’t much else I could remember and one night I thought I would try and see whether I could re-locate them on the Internet. Of course, if I had thought about it for a few more seconds I would have never tried. I couldn’t remember the title of the book or the title of the section. One day, I predict, we will be able to search for things which we can’t remember at all. We will also be able to key in a number and recall what we were thinking at 10.35 am on a Tuesday forty years earlier. But I didn’t come up with a complete blank because I came across a website called Paleo-future from which I have lifted most of the pictures in this post.

The picture above is from Collier’s Weekly, January 12, 1901 and provides a glimpse into the way the future would be in 2001. Flying machines, as I said, are always present. Luckily this prediction hasn’t come true. Since I imagine myself as a pedestrian in any case I am terrified by the idea of all the shadows these flitting vehicles would cast, the noise they would make and the danger they would pose when they came in low to land.

I would much prefer the following system.

Airships, though slower, have always seemed a more civilised way of traveling to me. This is a prediction of how the world would be in 2000 from Hildebrandt’s German Chocolate.

Here is a more daring prediction, this time from France 1910. 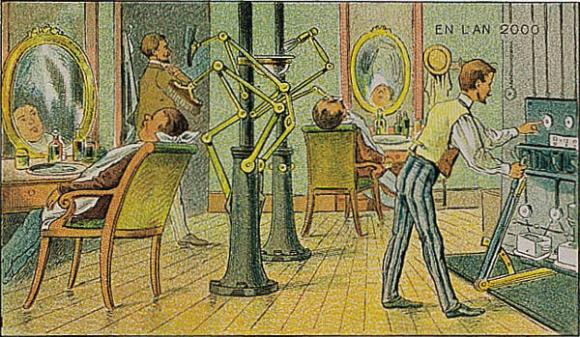 You will have noticed that there doesn’t seem to be much of an attempt to predict changes in attire in the year 2000. I suppose that this is because of the fact that most predictions are extrapolations and it is hard to extrapolate fashion. When people do bother to depict future clothes nine time out of ten it is a copy of the basic Flash Gordon model.

One attempt was made by Vanity Fair in 1939. The text says: Gilbert Rhode banishes buttons, pockets, collars, ties. The man of the
next century will revolt against shaving and wear a beautiful beard,
says the designer of boilers, pianos, clocks, and metal furniture. His
hat will be an an antennae – snatching radio out of the ether. His socks
disposable, his suit minus tie collar and buttons.

The clothes aren’t quite right, but the beard and the antenna hat are pretty close. I mean, who in their right mind could have predicted designer stubble and surely the antenna is basically the same idea as being permanently connected through your iPhone.

One of my favourites, again from the Hildebrants Deutscher Kakao and Deutsche Schokolade enterprise is one called the Wasserspaziergang, or Water Walk, though perhaps Water Promenade reflects the tone more effectively. I wonder whether prolonged exposure to chocolate fumes could have had anything to do with this vision. Anyway this is how we were going to spend our Sunday morning.

I think that the balloon pressure would have to be set very accurately. Any deviation from the exact value and the spazierganger would have started to float upwards or sink into the water. I also think that walking, say, on the Rhine might not have been a good idea, since the current would probably have carried you down to Holland, making you miss your Sunday lunch.

One thing which must have seemed a certainty was a moving sidewalk down a main city thoroughfare. Here is one complete with travelling benches, although shorter skirts might have made the thing a bit safer. 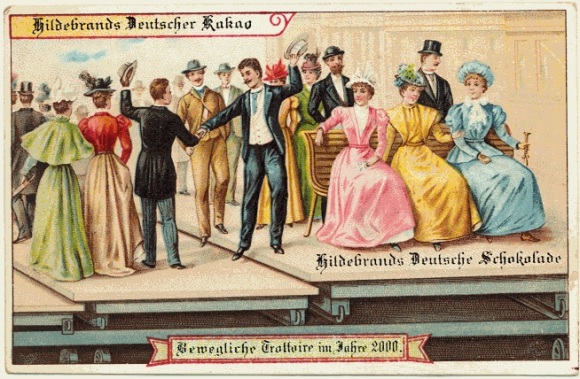 This, while still being wrong, is not much of a prediction since there is a film made at the Paris Expo of 1900 which shows something very similar.

To see all the other things we missed having, visit www.paleofuture.com