I don’t think anyone else has organised a gymnastics competition for angels. Here you can see some of the top contenders in action…

I often think about this peculiar painting of the Annunciation by Lorenzo Lotto. As you can see,    God doesn’t seem to have much confidence that the angel is going to carry out his instructions properly and Mary is just about to exit the canvas. (I’m sure there must be a never-discovered version where she has already hopped out). But most of all, I think about the cat which has jumped up in panic. What set it off? Just the sight of a big thing with wings ? Some angelic smell ? Or do angels move air when they come down and land ?

This one certainly seems to have come down fast. It looks to me a bit like a gymnast trying for a good score when exiting from a somersault. Perhaps overdoing it a bit and so appealing more to the crowd than to the judges. And thinking of that gave me the idea of organising the first Metaphysical Olympics. For the time being we only have one event – Gymnastics for Angels or Gymnangelastics.

One advantage in having angels compete is that they probably don’t take steroids. However there are also some problems. It is to be hoped we will never have to subject any to sex tests. And then there is the small matter that they don’t seem to turn up as often as they used to. Because of this, I have decided that we are going to judge the event by the way they perform in pictures of the Annunciation. Specifically, we will be focusing on how well they landed.

So here are some of the favourites as well as some of the outsiders in the Gymnangelastics event. Dutch and Flemish painters are unfortunately under-represented because most of them seem to prefer to depict the angel as it walks in through the  front door or else have it comfortably seated as if it had been served a cup of tea before bringing up the delicate subject it was called upon to discuss.

Beautiful wing position (and beautiful wings), hands in expressive but not overly flamboyant position. However the angel has not been able to completely check its forward motion. 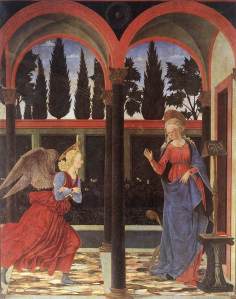 Quite a big wobble here. Wings OK but not outstanding. Hands-crossed position looks like a hasty attempt to regain balance.

Big disappointment here from Botticelli, who surely must have been considered a contender.Very bad form in general, everything pointing in different directions and looking very unstable. Perhaps just about to tip forward onto the ground or grab Mary’s garb.

Caravaggio
Go back and practise some more.
Non-starter.

David
Knees somewhat too far apart, hand gestures not perfect, robe not completely under control and wings in in-between position, but all in all a very impressive performance. Might just be a surprise medallist.
Dark horse. 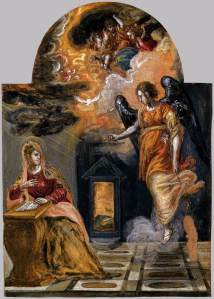 Almost certain to get injured landing like that.
Are you insured?

Fra  Bartolomeo
Just slightly tilted and askew, but another possible surprise.
The other Brother.

Gentile Bellini
Not perfect (I think you are supposed to land inside the house), but so dynamic and expressive it is very likely some of the judges will be swayed.
The menace from Venice 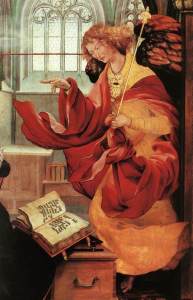 Walk on the wild side

Rubens
You can’t deny the talent, but a rather hard landing.
Heavyweight.

Simone Martini
Much simpler than some of the others, but bordering on perfection.
Shades of gold

Terbruggen
A Dutch follower of Caravaggio and having the same kind of problems in making contact with the earth.Never Land

Seems to have knocked a number of the house’s walls down and to have involved the holy spirit in a stuka dive.
Spectators advised to stand back.

And then of course there is Lotto. Pretty good but something is not kosher. I have great confidence in the intuition of cats and until the issue is clarified Lotto will suffer a one-point deduction.

These are of course my personal opinions. I am no expert on gymnastics or angels, so you might want to contribute your own scores.

By the way, I took all these pictures from a fantastic resource – The Web Gallery of Art where you can organise your own exhibitions by searching by keywords. Searching for “Annunciation” gave me 540 different paintings. You could, for example, try and find all the pictures of St. Sebastian they have. (Perhaps useful for an archery event at our Olympics).