This is something which I picked up in India once while interpreting for a rather unpleasant group of people. Luckily we had a very cheerful driver whose mood remained bright and sunny despite the black clouds which continued to settle inside his car.

I can’t remember his name, but I have come to think of him as Mr. Chatterjee, a name which conjures up his bubbling personality to me.

Once he turned up ten minutes late and the head of the delegation told me, “Ask him why the %$*! he’s late”. At which I said, “Mr. Chatterjee, is there any special reason why you are late?”

And Mr Chatterjee, wiggling his fingers and twinkling his head, with seeming glee, loudly exlaimed, “Oh! Communication Breakdown! Information Gap!”, a formula which I have taken to using myself as an excuse for almost anything.

I would like to ask you to stop a moment and consider what might be inside a Businessman’s Kit. In order to allow you enough time to come up with some plausible suggestions, we now have a musical interval. I was unable to find a song called “Businessman’s Kit”, so I have opted for some generic Indian music. (Actually it is not generic at all, it is really good). Play it and think.

At this point you can compare your answers with the solution: 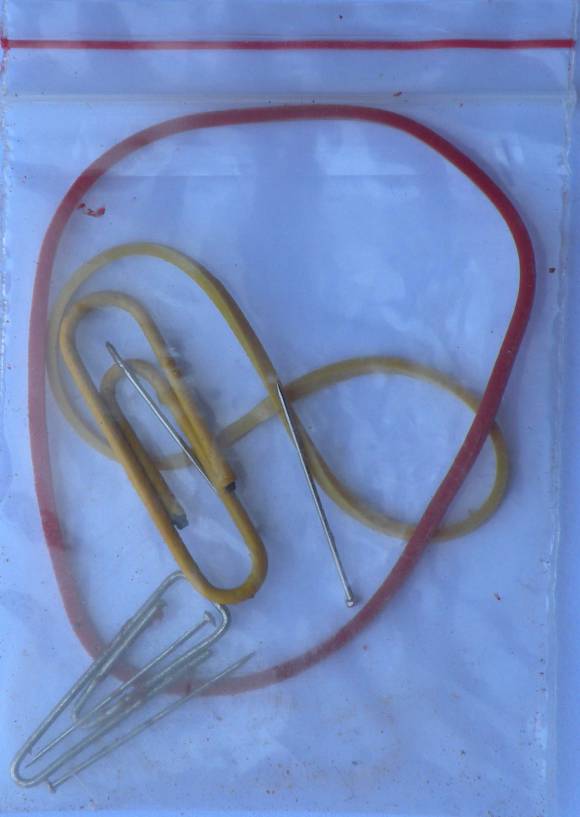 Being one of the least businessmanlike people I know, I find it difficult to understand in what way this is a “Businessman’s Kit”. The only thing I can think of is that it is a kind of starter kit. Someone with real business potential would rent out the pins, use the paper clips and the elastic band to fix a discarded engine found on a rubbish tip which they would then sell and after two weeks would be well on the way to Murdochdom.

When searching for “Businessman’s Kit” the only references I was able to find on the Internet were Celestial Enterprises (India) – Manufacturers of Guest Amenities for Luxury Hotels, who also produce “For Your Care Kits” and Hinu Enterprises – India  which states:

Perhaps I could write to them and ask for instructions. Or else I could send in my Businessman’s Kit and ask to swap it for something more in line with my abilities: a Daydreamer’s Kit for example.

I wonder what they would put in that.