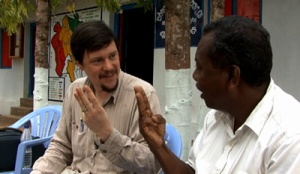 If you are interested in language and languages you might like to see the film “The Linguists”.
The film, presented as “a very foreign language film”,  is about David Harrison and Gregory Anderson, two researchers who travel the world to document vanishing languages. Most of the action takes place in Siberia, India and Bolivia and focuses on the Chulym, Sora and Kallawaya languages. In one of the first scenes one of the linguists says that one reason to study language is to “figure out the possible ways the human mind can make sense of the world around it”.

A number of strange and funny events which are not connected with language happen to the two linguists during the film. And researching vanishing languages has quite a few unexpected sides. It quickly becomes clear that vanishing languages tend to be spoken by vanishing people, which means that many of them are extremely deaf. Sometimes the two researchers spend days arranging an interview only to discover that their interviewee turns out to be speaking something completely different from what they had expected. In India, they discover that being able to dance with people is an important research skill which is not taught at university. 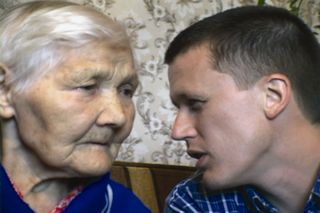 The film emphasises the stigma attached to speaking minority languages and the sadness of loss of culture, which is embodied in the last speaker of Chemehuevi, who finds no alternative but to speak to himself in it.

All ethnographic enterprises raise doubts about the possible arrogance and invasiveness of making other human beings objects of investigation. But Anderson and Harrison seem to make a special effort to return the results of their work to the communities concerned.

One thing I really missed was the fact that there was hardly any follow-up to the idea that languages help us to “figure out the possible ways the human mind can make sense of the world around it”. I would have liked to hear more about this and more about the features of the languages studied themselves. But I did read somewhere that “the documentary was shot over the course of more than five years and culled from hundreds upon hundreds of hours of footage shot on five continents” so maybe the answers I am looking for got left in the editing room.

One review suggested that it would make sense to trim the film, which lasts 1.03.46, down to an hour for easier distribution. My suggestion goes the other way: put back all the interesting parts you left out and make it a four-part series.

(Just in case I have misled anybody, the picture under the title is more about how to say “three” in Sora than how to say “extinction” in Chumyl.)